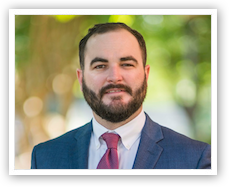 Ben Tobey grew up in the Lake Norman community in Denver, North Carolina and graduated from East Lincoln High School. Mr. Tobey continued his education at Pfeiffer University where he received a golf scholarship and played on the varsity men’s golf team for four years. At Pfeiffer he received numerous athletic and academic honors.

After graduating magna cum laude from Pfeiffer University with a degree in Political Science and a minor in Pre-Law Studies, Mr. Tobey attended law school at North Carolina Central University School of Law on an academic scholarship. While a law student Mr. Tobey served as an editor and senior editor of the North Carolina Central University School of Law Bio-pharmaceutical and Technology Law Review. While managing the rigorous study schedule associated with law school, Mr. Tobey also clerked part time for a plaintiff’s personal injury firm in Durham, North Carolina. Early on in his law career he learned the value of skilled advocacy.

When Mr. Tobey is not working, he enjoys cooking, hiking with his dog Chief, boating, golfing and spending time with his family and friends.