You cannot reason with the unreasonable;
When it is time to fight,
WE FIGHT TO WIN.
Schedule your consultation today
Home
Attorney Profiles
Claudette Bakhtiar Ericson 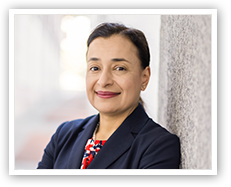 Ms. Ericson grew up in Woodbury, New York and lived and worked for many years in Manhattan before moving to North Carolina. She received her B.A. from Binghamton University, majoring in Comparative Literature and Philosophy, and an MFA in Writing from Columbia University. She received her law degree from Fordham University School of Law where she served as Associate Editor of the Intellectual Property, Media and Entertainment Law Journal and was very active in Moot Court. In her last two years of law school, she was one of a handful of students selected to compete on Fordham’s Bench Team for the Kaufman Securities Law Moot Court Competition, and was one of four finalists in the Wormser Corporate Law Moot Court Competition, which was judged by four New York Supreme Court Justices.

During law school, she interned for the Honorable Richard M. Berman at Queens Family Court. Judge Berman was later appointed to the United States District Court for the Southern District of New York by President Bill Clinton where he has served ever since. Working for Judge Berman gave her special insight into how complex custody, support, and juvenile cases can become, and she found herself developing a deep empathy for the families that passed through his courtroom.

After law school, because of her success in Moot Court, Ms. Ericson went to work for a small, aggressive firm in Manhattan that focused primarily on personal injury, matrimonial, landlord-tenant and commercial litigation. She also spent some years doing appellate work which further sharpened her litigation skills by allowing her to view cases from start to finish, noting the nitty gritty details that can make or break a case. With her move to North Carolina, she re-embraced the fascination with domestic cases she developed under Judge Berman, and focuses, now, exclusively on family law and divorce.

Ms. Ericson views herself as a professional “problem-solver” who searches for the most efficient, least costly way to resolve issues. Sometimes, this means embracing the Collaborative Approach which usually involves a voluntary, out-of-court exchange of financial information and resolution at mediation. Sometimes, though, it becomes apparent that a more aggressive approach is needed. When this happens, Ms. Ericson will “go to the mat” to fight for her clients in court.

When spouses with children separate, there are usually four issues the Court will address: (1) child custody, (2) child support, (3) alimony/post-separation support (which is, basically, alimony for the duration of trial), and (4) equitable distribution. Some people believe that the Court can do whatever it wants, and that if you get the right attorney, you can bend the Judge any which way. In truth, while the law is far from a science, Judges do rely heavily on statutes and case law to guide them in their decisions. That being said, there are a lot of gray areas where Judges exercise discretion. And so the best results come from having someone beside you who knows the law, as well as knows your Judge.

When Ms. Ericson is not working, she enjoys skiing or hiking in the Appalachian mountains with her husband, Lars, and their two children. She is also an avid runner and reserves some time each night to polish her Spanish, which she speaks with moderate fluency.