You cannot reason with the unreasonable;
When it is time to fight,
WE FIGHT TO WIN.
Schedule your consultation today
Home
Attorney Profiles
Samantha Jackson 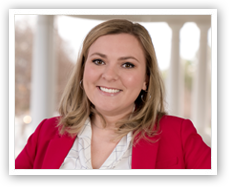 Samantha Jackson was born and raised in Union County. She attended Weddington Middle School and went to high school at Central Academy for Technology and Arts in Monroe. Samantha originally wanted to pursue a stage acting career and was named Best Actress in North Carolina and Best Supporting Actress in the Southeast for her performances. Once she decided to pursue a law degree, she knew that she could put her acting skills to use by representing clients in a courtroom.

She graduated cum laude from the University of North Carolina Wilmington with a degree in Political Science and International Affairs in three years. While pursuing her undergraduate degree, Samantha studied abroad at the University of Aberdeen in Scotland. She attended the University of North Carolina School of Law where she competed on the Arbitration Team and was heavily involved in Pro Bono work. She interned with the Federal Public Defender and the Southern Coalition for Social Justice, helping indigent clients navigate and try to overcome the obstacles of criminal court. While in law school, Samantha worked in the Domestic and Sexual Violence Clinic and represented clients in child custody and divorce actions as a student. During her time at the clinic, Samantha took the only law school course in the country that teaches trauma informed techniques for practicing law, and she regularly implements those techniques into her practice.

After graduating from UNC and passing the bar, Samantha moved back to Charlotte start her career. Samantha focuses her practice on family law cases including divorce, child custody, child support, alimony, domestic violence, and equitable distribution.

When she is not working, Samantha enjoys hiking, cooking for her friends and family, and watching way too much television.