You cannot reason with the unreasonable;
When it is time to fight,
WE FIGHT TO WIN.
Schedule your consultation today
Home
Practice Areas
Criminal Defense
DWI/DUI
Sentencing for Driving While Impaired

Sentencing for Driving While Impaired

Driving while impaired in North Carolina is treated on its own separate sentencing scale within the criminal justice system.

Driving while impaired is a misdemeanor in North Carolina. At sentencing the court can consider proof of any mitigating factors the defense argues, or any aggravating or grossly aggravating factors the prosecution alleges. This could be decided by the judge, or in some circumstances, a jury. Sentencing can be decided as a separate hearing after trial or included at the end of trial. Either way, evidence introduced at trial can be considered at sentencing.

Any one of the following can affect the level at which a person is charged, convicted, and sentenced for driving while impaired:

If you have been charged with a DWI it is crucial to have a good criminal defense attorney experienced with defending against DWI charges.

Mitigating factors can help decrease a person’s sentence and are something argued by the defense. In a DWI sentencing hearing, the court will consider the following factors:

Factors that will NOT be considered mitigating by the court for determining sentencing level include that the driver was suffering from drug addiction, alcoholism, diminished capacity, or mental disease or defect. 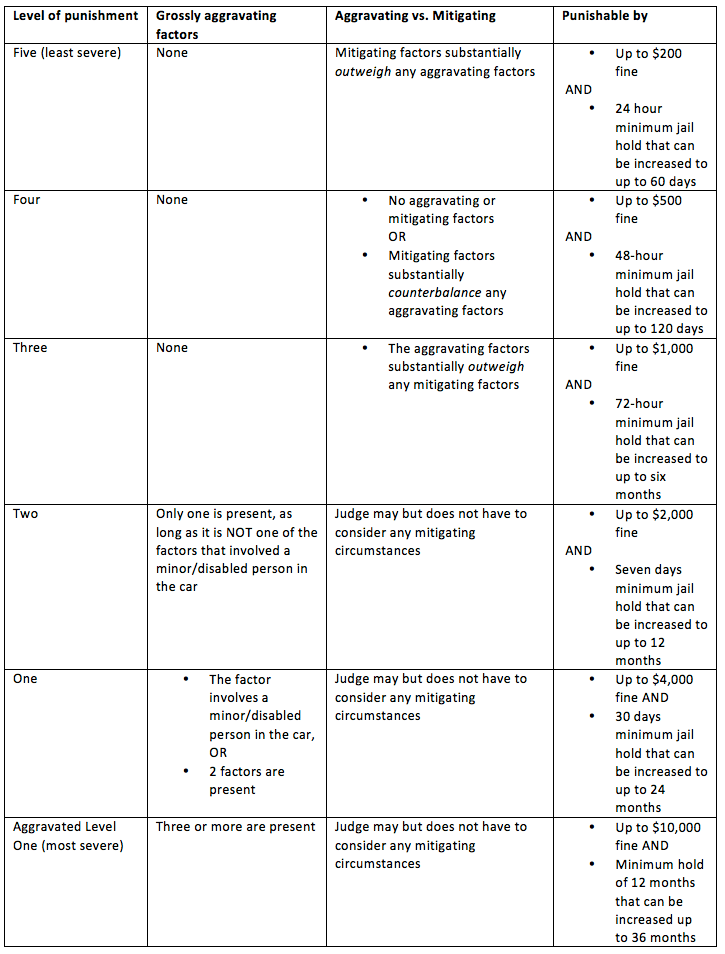 Your defense attorney may be able to negotiate community service for jail time for Levels Five through Three. Higher-level DWIs may be able to negotiate out of jail time if the defendant agrees to certain probationary measures. If you are charged with any Level of a driving while impaired in North Carolina it is extremely important to have skilled legal representation. The defense attorneys of Arnold & Smith, PLLC fight for the rights of individuals accused of DWI almost every single day in Charlotte, Mecklenburg, Cabarrus, Union, Iredell, Gaston and the surrounding counties. Contact us today for a free consultation about your case.